Posted on Dec 1, 2014 in Gender and Sexual Orientation, Lessons from the Field 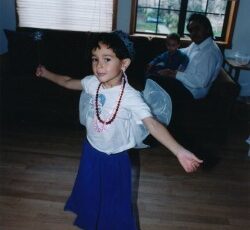 People often ask me about the cultural barriers that I see working with Latino families around family acceptance. I hesitate to answer this question because I don’t want to feed into stereotypes. The term culture is often used to talk about people who are considered different than the mainstream, but not about U.S. culture in general. This post discusses dominant cultural beliefs and norms related to gender and sexual orientation that I grew up with in my home country, the U.S.A.

This post was originally written for the Parents Project.

Having a gender-creative, gay child has been eye opening for me. It has helped me see that the dominant beliefs in the culture are just that: beliefs.

I recently found some photos of my son that I had hidden away years ago. He was around four years old, dressed up in a skirt, and fully accessorized with earrings, necklaces, angel wings, a crown, pink lipstick, and a magic wand. He was happy and not the least bit ashamed. I had hidden the photos away because, unlike my son, I was ashamed. Years later, my son is a proud gay man and I’ve come a long way. I’ve learned that it wasn’t my son that was causing me shame; it was the biases and expectations of the culture I grew up in. I hope that this post will inspire other parents and caregivers to reflect on the cultural barriers that cause us fear and shame. Understanding these barriers can help us find freedom in a more inclusive way of thinking.

We all have culture, both inside of us and around us. We have learned beliefs about the way things are, and the way they are supposed to be. We have expectations from our culture about how to raise our children. Culture is like the air we breathe. Sometimes we take it for granted and don’t question it. Despite my liberal upbringing, I learned many mainstream cultural biases about gender and sexual orientation from growing up in the U.S.A.

Having a gender-creative, gay child has been eye opening for me. It has helped me see that the dominant beliefs in the culture are just that: beliefs. Even when I didn’t buy into these beliefs 100%, I felt pressure to conform to what was expected of me. Here are some of the cultural barriers that got in my way as a parent. As you read, I invite you to reflect on how these, and other barriers, might impact you.

Though the U.S.A. is called the land of the free, there is little freedom to stretch outside of the rules based on gender.

Four-year-old Danny had not yet learned that there were rules, based on gender, for what a child can or can’t do. I, on the other hand, knew the rules. Though the U.S.A. is called the land of the free, there is little freedom to stretch outside of the rules based on gender. Wearing dresses is taboo for both boys and men. Boys are expected to follow the boy code, which entails being tough, powerful, aggressive, and showing no sign of weakness or femininity. Being romantically and sexually involved with people of the same sex is also taboo. Adults are expected to make sure our children follow these cultural rules or risk being shunned. Children also enforce gender rules through bullying and peer pressure. Things are changing, but we still have a long way to go.

Nobody had to tell me the rules I learned about gender growing up. I learned them from the books I read, the toys I played with, TV shows I watched, the behavior of the people around me, the way people dressed, and the language I heard. I didn’t realize that this way of thinking and doing was cultural. I thought it was just the way things were.

2. Gender norms are normal (AKA healthy and sane).

Sadly, my cultural beliefs prevented me from seeing my son as the unique and beautiful child he was.

People who follow cultural rules, or norms, are considered normal. This is tricky because the word normal has a variety of definitions. It can simply mean to follow the standards for your culture, but it also refers to behavior that is natural and mentally sane. As a result of cultural biases, many parents fear that a child who fails to follow gender rules is unnatural, mentally ill, and will be shunned by society. Having grown up during the women’s movement, I didn’t believe everything I was taught about gender. But, I still feared that something was wrong with my son. I worried about my child’s behavior as if it were a disease, wondering what caused his ailment. I secretly hoped that something would happen to make my son more like other boys. Sadly, my cultural beliefs prevented me from seeing my son as the unique and beautiful child he was. Years later, I learned that there are many ways to express gender and that my son’s behavior was both natural and healthy.

You don’t have to look far to see that mother blaming is rampant in our culture.

When I thought something wasn’t right with my son, I wondered if I had done something to cause the problem. After all, isn’t it always the mother’s fault if there is something wrong with their child? You don’t have to look far to see that mother blaming is rampant in our culture. In spite of the influence of feminism in my life, I was susceptible to mother blaming. Danny’s dad died early in my pregnancy, so I thought maybe the trauma I suffered during pregnancy had damaged him psychologically. Maybe, I should have done more to reduce my stress during pregnancy. Maybe, if I parented him differently, he would be more like other boys. I also feared mother blaming from others. Would they think I was an unfit mother because I didn’t pressure my son to be more boyish?

Now that I fully embrace my son for who he is, I’m no longer worried about being at fault. On the contrary, I’m happy to take even a fraction of the credit.

The idea that boys need fathers to teach them to be men often goes unquestioned in our culture.

One of the ways that mother-blaming played out for me was blaming myself that Danny didn’t have a dad. The idea that boys need fathers to teach them to be men often goes unquestioned in our culture. I thought perhaps Danny had gender identity problems because he didn’t have a dad. As the years went by, I felt more and more pressure to remarry, so he wouldn’t grow up fatherless.

There were constant reminders from the world around me that, without a father, our family was considered deficient. The majority of Americans believe that a growing trend in single motherhood is bad for our society. A majority also believes that children need both a mother and father to grow up healthy. Influenced by these cultural beliefs, I struggled with feeling that I wasn’t good enough, as a woman or as a parent, without a man.

Danny grew up without a father, but he had an amazing grandfather, uncles and other adult men in his life. Most of them accepted him the way he was and didn’t try to mold him into a typical boy. I now believe that children need to see that manhood doesn’t have to look any one way. I also see that single moms, lesbian moms, and parents or caregivers of any gender can raise healthy children of any gender.

5. Nature made us two different and opposite genders.

I grew up taking it for granted that we are all born boys or girls and grow up to be men and women.

I grew up taking it for granted that we are all born boys or girls and grow up to be men and women. Men and women were opposite one another and married people of the opposite sex. When children are born, or even before birth, their gender is determined. As soon as gender is assigned, the rules (#1 above) are enforced. This way of thinking about and enforcing gender is sometimes called the gender binary, and is anything but natural.

I now realize that we are much more diverse in nature than our culture tells us. And, rather than being in two opposite gender poles, we are a spectrum of human beings with many different gender expressions and gender identities. This awareness allows me to see that my son part of a beautiful spectrum of gender.

6. Women (and feminine men) are inferior.

Boys aren’t supposed to wear dresses in our culture, because femininity is considered a sign of weakness.

Why is our culture so insistent about enforcing gender rules? Having a gender-creative son helped me see the connection between the stigma I felt as a single mom and the mistreatment my son faced for being gender-creative and gay. Both are rooted in a culture of male dominance and a belief in the inferiority of women.

Even though women have made many important gains, we are still expected to know our place and marry a man. When we are strong, independent, masculine, in love with another woman, or transgender, our culture has many ways to put us in our places.

Boys aren’t supposed to wear dresses in our culture, because femininity in men is considered a sign of weakness. When we tell our boys to “man up”, we are teaching our children that there is something wrong with girls. We are also teaching them that there is a cost to enjoying the privilege of manhood. Anything considered girly or feminine is not allowed.

Culture is not fixed or static, but is always changing. I believe that parents and caregivers of gender-creative and LGBTQ children have an amazing opportunity to challenge ideas we grew up with and be part of building a culture that celebrates and values all children.

About Laurin Mayeno and Out Proud Families